DISCUSSION: How Can We De-Clutter Bulky Performance Reports?

It’s getting close to becoming a natural law of performance management that performance reports only know how to grow, not how to shrink. Despite the fact that we all know large reports just won’t be read, we still struggle to take information out of them. 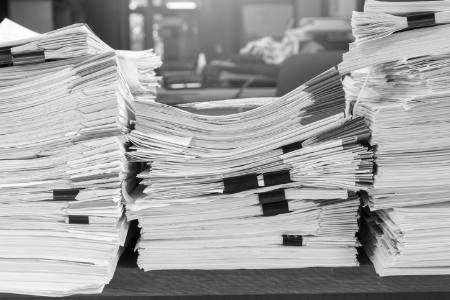 There is story after story about how several years ago “Bob the Manager” wanted a particular measure – say revenue earned per employee – and it’s been reported ever since. Even though Bob only wanted it for a couple of months and left the organisation two years ago!

After a succession of “Bobs” with their ad hoc measures and lack of skill in how to determine the information they need most, performance reports become bloated and unusable.

There’s also the belief that “we just might need that information one day, so let’s keep it in there.” It’s a symptom of not focusing or prioritising, of not really knowing what the purpose or role of the performance report is. It’s trying to be all things to all people for all time.

When attention scatters, nothing matters (that just came out of my head, but it sounds groovy – like it should be a mantra). The point is, performance reports are supposed to focus us so we can take action on what needs our action the most. We’re stupid if we think we have to solve every problem, set targets for every aspect of our work, and monitor everything that can be measured.

The processing power of our conscious brains, coupled with the number of hours in a day and the lack of resources we always complain about, forbid it. Performance reports are supposed to focus us.

But that’s what Business Analysts are for…

The bulk that many performance reports have also makes navigation through the report a nightmare. The report becomes an unbearable effort to produce. And the amount of data that has to be collated and analysed keeps analysts punching away at their computers through their lunch breaks and until 9pm for several nights after the end of month.

And of course the users of the report don’t really know which information they should give priority to, and which is only noise drowning out the important business performance signals.

Performance report writing tends to be a fairly evolutionary process, where it can shift and change and adjust almost every month. Often many people that contribute content to the report, such as graphs or commentary or project progress updates (and usually way too much of these latter two), don’t really know how the information will be used. Most believe the information won’t even be used at all.

Performance reports need to be simpler and more focused! But how?

JOIN THE DISCUSSION: We have to be very deliberate and very disciplined about the types of information performance reports should contain. And that’s going to require a rationale and some guidelines. What are yours? Share your ideas for how we can de-clutter our bulky performance reports at the Measure Up blog…