How to Get Buy-in Through Socialising Your Performance Measures

Our typical approaches to get people to buy into performance measures or KPIs don’t work very well. How do you get more KPI ownership then?

The solution is to completely reframe what it means to “buy in”: instead of trying to ‘get’ people to buy in, we need to instead ‘let’ people buy in. That means taking a very different approach to how we normally work together in business. 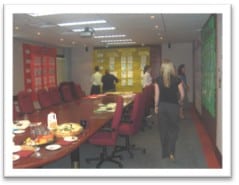 Invitations, not agendas or meeting requests.

In our haste and eagerness to get people involved in measuring performance, it’s easy to fall straight into typical organisational or bureaucratic protocol and schedule a meeting. But protocol makes people feel a sense of obligation or expectation to attend, even if they don’t want to or don’t have the time.

Obligation and expectation get in the way of buy-in happening, because they are a ‘push’ approach to measurement. True buy-in can only happen when people feel pulled or compelled toward measurement. It’s okay if not everyone wants to be involved, and it’s absolutely okay to wait until they decide they want to be involved.

TIP: When you socialise your performance measures, it’s better that people take part because they chose to, and that they give the time they can afford to give.

Death by PowerPoint is no joke. When you give a presentation to suggest a suite of performance measures to people, what you’re killing is their engagement, and any chance that people will feel a personal sense of ownership of those measures.

Dialogue is a different tack, and it means that people aren’t expected to passively accept a set of measures but rather talk about what performance measurement really means, which performance results are really important to measure, and which measures are useful or not.

TIP: When you socialise your performance measures, give tonnes of time and space for natural and unforced dialogue to happen.

Ask for honest and constructive feedback about existing performance measures, and really mean it. Normally an email might get sent around to stakeholders asking them to provide some feedback about an attached measures report. Don’t bother. That won’t generate any kind of buy-in at all. It will smack of a cursory attempt to consult (but ultimately ignore) people’s input.

Instead, get people physically involved where they can ask questions and talk about the measures with each other. Better still, shelve your existing measures for a while, and let people come together to design the measures they believe are best, and feel excited about.

TIP: When you socialise your performance measures, make it clear that nothing is set in concrete and everyone’s ideas are worth exploring.

This might seem like a strange idea: to encourage standing when you discuss performance measures as opposed to sitting down. Again it’s about breaking off another chunk of that bureaucratic casing that stifles buy-in.

Hang your existing measures (and the goals or strategy or objectives they monitor) on walls in a meeting room and invite people to come along, whenever they like and for as little or as long as they like, to discuss the measures and share their ideas and feedback. If you remove the chairs from the meeting room, you’ll find people will move more freely and that means they’ll think more freely and discuss more freely.

TIP: When you socialise your performance measures, do it in an open space for people to mill around and come and go as it suits them.

TAKE ACTION:
Who would you like to engage in performance measurement in your organisation? Why not arrange a casual Measure Gallery event around your performance measures, and invite them to come in and share their feedback for making those measures more meaningful?