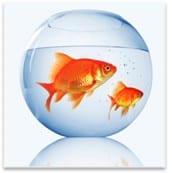 A pilot is a small and focused trial run to test an approach, before deciding if and how to implement that approach more fully. Pilot tests are often used to test new business procedures, technology, medications and even market research questionnaires and surveys. They’re a bit like a fishbowl – you contain it in a small time and space and watch what happens.

If you’ve decided to start with a pilot test of the PuMP Performance Measure Blueprint – or any other measurement methodology – then, as with any pilot, you’re not only implementing the approach but you’re also evaluating the approach too. So even though it’s a quick and simple version of what you’re hoping to implement more fully later, don’t get blasé and think that your PuMP pilot doesn’t need careful planning. It does, if you’re going to get the most leverage from it.

Start small. Choose just one team or one process or one strategic goal to develop measures for. Don’t give in to the temptation of scope-creep! The more ruthlessly you focus the first time through, the more success you’ll likely have.

Involve a small group of about three to five willing volunteers so you don’t have cynicism fighting the momentum first time through. They’ll be valuable to involve in subsequent performance measure projects, because they’ll become the strongest advocates. But for now, give yourself all the conditions you can which will support your short-term success.

Set a short timeframe and darn well stick to it! I find that with a small focus, a six-week timeframe is realistic to select, implement and start using your first meaningful performance measures.

Have a plan that draws on the simplest application of PuMP or your chosen performance measurement methodology, but make sure you work all the way through the process, don’t just stop after designing some measures. Bring them to life and use them to test their true value.

Build time in to reflect and review the approach you took, and design your way onward and outward with the next phase of implementation.

Write up your pilot experience as a case study, and share it around with the people you’d like to get involved in next phase of performance measure implementation. Encourage the interest and ownership to grow organically – don’t force it.

Build the critical mass by taking a few more “pilot approaches”, until you get enough support and leadership to make PuMP your corporately adopted measure development framework.

TAKING ACTION:
Get a very quick and easy KPI success by choosing just one area your team needs to improve and monitor, and follow the PuMP process to pilot test a good measurement approach. Build up the momentum through small successes!