How to Stop Measuring People 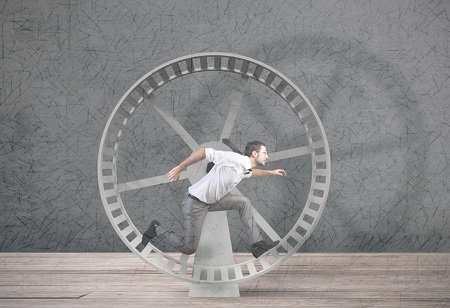 We measure people to manage them and improve performance. But does it really work? Rarely, and more likely never. Performance measures are too often seen and felt like a big stick. People feel judged and managed by measures, and that doesn’t create a constructive atmosphere for improving performance.

But the measurement of people’s individual performance doesn’t seem to be going away.

Measuring people’s people will disengage them.

We all know the symptoms of measuring people who don’t want to be measured:

Paul Frith, our PuMP Partner in the UK, told me a story about pharmaceutical account managers who have a Call Rate measure. It tracks how many meetings or calls they have with their customers or potential customers. It’s a trivial measure because it only tracks the number of calls, not the intended result of those calls.

When the account managers are judged by that KPI, they are almost forced to call only the people they know would be willing to speak with them, rather than the right people to make a difference. Being measured by this trivial KPI actively discourages the account managers from being brave to do the right thing – which might mean taking a penalty for not hitting their Call Rate targets, in their attempts to reach the right customers.

These symptoms of measuring people don’t lead to improved performance. They often lead to worse performance. And don’t think that there is a solution to stop the gaming and cheating, either. When we persist with measuring people, and trying to find foolproof ways to do it, we just keep reinforcing the defensiveness, helplessness, and cynicism that people feel – which keeps resulting in the resistance and gaming and cheating, as it always has done.

“If you try to remove cheating by creating a cheat-proof measurement system, you waste a lot of time… If you remove the need to cheat, then cheating will be much less likely to happen, and it won’t cost you anything.” – Dean Spitzer

We need a new way to get people to accept and own, and ultimately excel at improving organisational performance.

Humans naturally want to be engaged, so when they’re not engaged, it’s because something is preventing it. Dan Pink, in his book “Drive”, talks a lot about engagement and how it comes when rewards are intrinsic. And for intrinsic reward to be possible, he says we need 3 elements:

Leaders have some specific beliefs that mean they’ll feel like they’ll lose control of performance if they stop measuring people:

Beliefs don’t change overnight. So we cannot expect leaders to just stop measuring people. But we want to help them change their perspective away from working harder and toward the idea of “baking in a better way of doing things”.

The first step to move away from measuring people is involvement.

If you have people resisting performance measurement, either because their performance is being measured directly, or because they believe measures are used to judge them, then the best first thing you can do is to get them more involved.

There are a few ways we do this in PuMP:

The second step to move away from measuring people is accountability.

To feel a sense of ownership of a measure, people need to know what they really should be doing with that measure. And this is the perfect time to redefine what your organisation means by accountability.

A constructive definition of accountability drives the right behaviour. The behaviour is right when it is trying to fundamentally improve performance and not do the gaming and goalpost-shifting that comes from being measured.

Accountability probably isn’t defined in your organisation, is it? Try this constructive definition of accountability, with three essential parts to it (and there’s more detail here):

The pharmaceutical company, with the trivial Call Rate measure, proves this is possible. The leadership team recently experimented with our new definition of accountability. They held a “Live Learning” session and involved the account managers in figuring out what the whole organisation needed to do to improve performance in reaching their customers to have the right impact.

When leaders and managers and employees all begin to realise that the power of performance measures is only unleashed when they are used as a tool in people’s hands and not a rod for their backs, that’s when the organisation starts its journey toward high-performance. We have to stop measuring people. We need to instead help people to measure and improve the processes they work in.

Using Measures Badly is No Excuse to Not Use Measures
Should ESG be a Strategic Perspective?
How to Recognise and Avoid Bad KPI Advice