KPIs Work With Buy-in, Not Sign-off

Buy-in is choice. Sign-off is obligation. Choice has loads more energy, that sustains itself longer, than does obligation. For buy-in to KPIs and performance measurement, people must be involved because they choose to, and not because they’re obliged to. 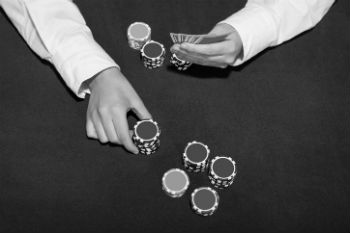 “If, during the course of the gathering, any person finds him or herself in a situation where they are neither learning nor contributing, they must use their two feet and go to some more productive place.”

The law of two feet is instrumental in creating the depth of buy-in that results in people working together to quickly solve hard problems or create meaningful changes.

Just think about all the times you had to participate in because you were obliged to, or were told to by someone with more rank or power than you. And contrast that with a time when you very much wanted to participate, because it meant something to you.

When we choose, we buy in.

My PuMP Partner, Mark Hocknell, describes how buying in to KPIs and performance measurement is similar to poker. When you buy in to a poker game (literally), only you can make the decision to pay over the cash, or what’s called the “buy in”, to join the game.

Without buy-in, KPIs do more damage than good.

In PuMP, we don’t force people to be involved in choosing, creating and using KPIs and measures. We invite them. And if they’re not interested or not ready, then that’s fine.

When people are forced to be involved – especially with something as contentious and tricky as performance measurement, which is hard enough to do well in any case – they will do more damage than good:

KPI buy-in only comes through choice.

Whoever is interested and ready will be the right people to take the organisation’s performance culture to the next level. Their buy-in will fuel the collaboration, creativity and commitment to choose, create and use KPIs that make a powerful difference.

Mark has seen this happen many times. In a recent PuMP workshop, someone asked him if the Measure Gallery concept we use really works; if the right people really do turn up. (The Measure Gallery is how we socialise a set of newly developed KPIs, among all the stakeholders.)

Mark simply replied, “Always.” And he told the story of how the executives of one Australian utility initially said they couldn’t make it to their organisation’s strategic Measure Gallery. But they turned up anyway. It was because they were invited and not obliged, and they made the choice to come. And their contribution to the KPI work was brilliant.

If we try and force everyone to get involved in measuring performance, before they have any buy-in, we will be chasing after poor KPIs and a deteriorating performance culture for the years to follow. It’s actually faster to wait until people are ready to buy in. So work on the buy-in first.

Buy-in is choice. Sign-off is obligation. For KPI buy-in, people must participate through choice, not obligation or force. #pumpblueprint
[tweet this]

Reflect on the ways that you’ve seen people participate in any task to do with KPIs or performance measurement. What correlations do you notice between their level of buy-in and the goodness of the KPIs created?