Is OGSM a Good Approach to Performance Measures?

OGSM needs a clearer distinction between its component terms of Objectives, Goals, Strategies and Measures, to avoid the usual problems of measuring strategy. 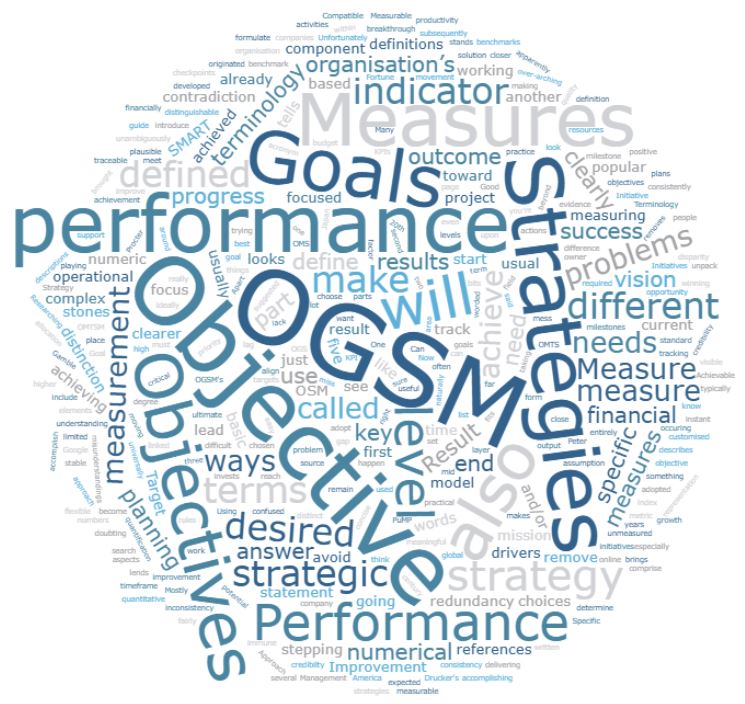 OGSM stands for ‘Objectives, Goals, Strategies, and Measures’. It’s a strategic planning model that is said to have originated as part of the quality movement in Japan, and subsequently developed and brought to America by Procter & Gamble, in the mid 20th century. It was also apparently based on Peter Drucker’s Management by Objectives.

Many Fortune 500 companies use OGSM for their strategic planning approach, which lends it instant credibility. But taking a closer look at how performance measurement fits with OGSM, it’s easy to start doubting its
credibility.

Terminology definitions for OGSM is where the measurement problems start.

There’s already a lot of terminology inconsistency between the most popular online references for OGSM (on the first page of Google search results for the term ‘OGSM’).

Objectives are also defined in these different ways:

Goals are defined in these different ways:

Strategies are defined in these different ways:

Measures are defined in these different ways:

Researching beyond these first five most popular references for OGSM brings up even more disparity, especially in the definition of Measures.

Apart from Strategies, which is fairly consistently defined, can you see the redundancy and contradiction that you’d end up with if you adopted all these definitions of OGSM?

Can OGSM lead us to measure the right things?

If we don’t have a practical understanding of each part of OGSM, and each part of OGSM isn’t clearly and universally distinguishable from the other parts, we’re going to see problems in the performance measures we end up with:

How to remove OGSM’s redundancy and contradiction problem.

One potential solution to set up the bits required to achieve something is to align the OGSM terms to the strategic planning terms we use in PuMP:

But I don’t think we need another acronym. Do we really need to make it any more complex than this list of basic elements of a strategy?

OGSM needs a clearer distinction between its component terms of Objectives, Goals, Strategies and Measures, to avoid the usual problems of measuring strategy.
[tweet this]

In light of the points in this article, does the structure and terminology of your strategic planning model help or hinder the selection of meaningful measures of outcomes and their drivers?