No Failure, Only Feedback

One person that always seems to have fun around failure is Adam Savage, from Mythbusters. He’s like a big kid, wide-eyed and giggling, as he and his more stoic co-star, Jamie Hyneman, test all kinds of pop-culture myths, like whether you can ride a motorcycle on water, escape a turtled car under water, and put your hand into molten lead and not be injured. Adam routinely says that he doesn’t care what result they get, just that they get a result. When their tests succeed, he laughs. When their tests fail, he laughs. And in both cases, he learns (and loves it). Why can’t we all be more like Adam Savage? 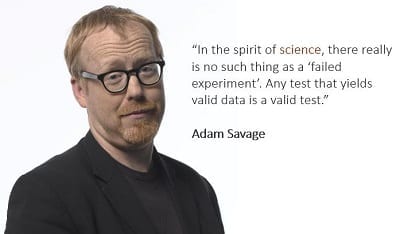 No Failure, Only Feedback

We don’t like failure. On a personal level, it feels like we are the failure. We worry about looking stupid, losing face, damaging our reputation, and hampering our career prospects.

And on a professional level, it weakens our position when we negotiate for future funding, and threatens the viability of our business unit or even the whole organisation. Our culture doesn’t tolerate failure. But we have to be open about failure before we can expect that culture to change.

When we can admit to failure, and celebrate the lessons we learn from it, it makes it easier for everyone else to do the same. Every failure we ignore is a missed lesson that could have been a squirt of nitrous oxide in our pursuit of high performance.

Sure, things might change for while, but without learning from failure, change won’t be at a deep enough level to last. Failure has to be framed as feedback. We should treat Adam Savage’s advice as a mantra of evidence-based leadership:

“It’s sort of a mental attitude about critical thinking and curiosity. It’s about a mindset of looking at the world in a playful and curious and creative way.”

Whether we’re playful, curious and creative like Adam Savage, or whether we’re stoic and matter-of-fact like Jamie Hyneman, it matters not. The point is that we’re not judgemental about failure.

How does your organisation behave around failure? Do you have some war stories or cool wins to share with us?