Targets That Are Shoulding You in the Foot

How do you feel when you hear the word ‘target’ at work? Nervous? Anxious? Excited? Motivated? Competitive? That’s the funny thing about targets: we often have an emotional response to them, based on whether or not we believe we can meet them. Is that healthy? 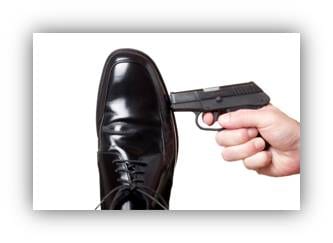 Some targets trigger anxiety and feeling not good enough. It’s hard to be creative, and patient enough to find real and lasting performance improvements, when we feel anxious or we like a failure because we’re not already performing at target.

This anxiety comes from expectations, from ‘shoulds’. It’s the same feeling we get when a loved one criticises us. They feel we ‘should’ be behaving in a different way to how we are, and we feel bad about not measuring up.

When targets have the energy of ‘should’ our attention can easily fixate on the urgency of closing the gap between as-is performance and should-be performance. And our typical reactions to urgency kick in: we push harder, we rush, we make excuses. And these reactions cause stress.

Often this energy of ‘should’ starts with the executives or managers who set the targets. But they equally as often can come from how we frame the targets in our own minds.

Intentions rather than expectations.

The first mindset shift is to think of targets as intentions rather than expectations. We have a target because we’re measuring something we want to improve. What we want to improve is a result that is really important to us. That result is an intention that we have to make something important a little bit better.

For example, imagine we have a target for reducing the average time it takes our team to resolve customer queries to 12 hours, instead of the 24 hours it takes now. Our team might feel like they have to rush more, to hit that target. They might believe they have to start hitting now, so next month’s measure looks good. They’ll cut corners, they’ll take focus off doing the job right, and they’ll burn out.

Instead, we could encourage our team to remember why reducing the time matters. It’s because we care about our customers and want to solve their problems as best we can. It’s not a numbers game. And rushing and cutting corners will only make our customers less happy.

So before we set targets we should revisit what that intention is. This way the energy to pursue the target comes from inside of us and isn’t imposed on us from the outside. In other words, we feel buy-in.

Pursuing rather than hitting.

The second mindset shift is to think about pursuing the target, not hitting it. Hitting a target is all about numbers, a game we play every month to see if performance is good or not. Pursuing a target is about exploring what we can change to move closer to an elevated level of performance. Curiosity is the dominant emotion here: curiosity to discover causes holding performance back and invent elegant solutions to remove those causes once and for all.

Our team, from the earlier example, could examine the process of handling customer queries, and find ways to make the process simpler. They might ask different questions of the customer for a better problem diagnosis, they might collaborate to share solutions with each other, they might do away with red tape and unnecessary approvals.

So rather than assigning our self-worth based on hitting should-be targets, and pushing and rushing to hit them, we can instead practice a continuous improvement mindset to find the easiest ways to elevate performance to could be targets.

Gradual rather than instant.

Targets don’t have to be suddenly met. In fact, they often can’t be. An athlete isn’t suddenly going to take 5 minutes of their best 10km time just because their coach sets the target. The athlete needs time to improve their capability to perform at that new level. Targets need to come with timeframes, and the timeframe needs to respect the amount of inertia an existing process has, and what it will take to make it more capable.

Our example team, trying to reduce the time to handle customer queries, could monitor the impact of their process changes, and over the course of several months, see if the overall level of performance is getting better. They would learn what works and what doesn’t, and the successful changes would mean they never have to push or rush to hit a target: they build the capability into their process.

The best targets – and probably the ones that are achieved the soonest – are those that evoke our curiosity and an energy of could-be. If targets are all about should-be, they won’t likely tap into the very creativity and curiosity required to reach them.

What’s the energy of targets in your organisation or business? Is it evoking a healthy response from your colleagues or employees? Or is it shutting them down, and sabotaging your ability to elevate performance?