The 3 Signs To Say Goodbye to a KPI

Hoarding is a disorder where people have incredible difficulty parting with possessions, or an incredible compulsion to acquire more possessions. They, and everyone close to them, drown in clutter. Are you a hoarder… of KPIs? 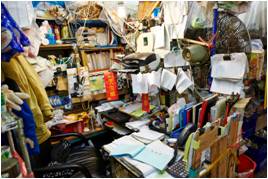 If you have too many measures or KPIs, and even a mild fear of letting them go in case you need them one day, then you might also be drowning in clutter: a clutter of data.

The problem with having too many KPIs is that you can’t really function with them all. It’s impossible to monitor them all, and too hard to know which are the priorities. You’re paralysed. You can’t make decisions.

Having too many KPIs is as bad as having none. It’s time to clean house. Here are three signs you can use to decide which KPIs to say goodbye to:

Sign #1: The KPI has reached its target and is staying there.

We measure specific results with KPIs because we want to improve those results. Now, while continuous improvement is certainly the philosophy that underpins good performance measurement, not everything should be improved forever.

If you have a KPI that has reached its target, and is now at a level of performance that isn’t a priority to keep improving (because there are other higher priorities to improve), it’s time to let it go. Otherwise, you’ll be wasting resources on gold plating that’s not needed.

Sign #2: Strategy has changed and the KPI no longer aligns.

Don’t be afraid to say goodbye to a KPI if it was designed for a goal that is no longer important. If you don’t, you’ll waste precious attention on results that don’t matter enough anymore.

Sign #3: The KPI turns out not to be as useful as expected.

We can master performance measurement but I don’t think we can perfect it. Consequently, we might design a KPI that sounded like a brilliant idea at the time, but later when we start using it, we realise it doesn’t have the power we hoped for.

Let that KPI go, so that it doesn’t mislead people. And if you need to, replace it with one that’s more useful.

I’m a believer in keeping historic data because it’s cheap enough to do it these days, and it can be a treasure trove for analysis in the future. Data doesn’t really take up space, like a KPI does in a performance report.

So, archive your KPIs, by retaining documentation of their definitions. You can do this in your corporate performance measure dictionary, marking the KPI as ‘archived’. Then take them out of your performance reports, and stop extracting the data to compute them.

Got KPI clutter? List your KPIs in a spreadsheet, create a column for each of the 3 signs, and start ticking off the KPIs that are candidates for letting go.