How to Kill the Ever-Present Fear of KPIs

When people have a fear of KPIs, of under-performance or bad decision-making being exposed, performance cannot improve. We have to kill the fear of KPIs. And we can. 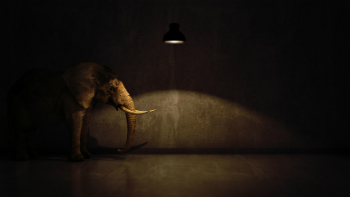 In almost every conversation about KPIs and performance measurement, the elephant in the room is the fear people feel about KPIs. They all know it’s there, it’s big and smelly, but no-one wants to talk about it.

What has put this fear there, in the room, is the belief that one person has full responsibility and control over the KPIs assigned to them.

Of course, they won’t directly admit it. They don’t want to appear weak or cowardly or not cut out for their job. But indirectly, this fear of KPIs manifests in debates about the integrity of the KPIs, the lack of resources to reach targets, the difficulty of getting the right data.

What we don’t debate, and should, is the belief responsible for this fear.

Kill the fear of KPIs with a single blow.

The belief that put the fear elephant in the room, that a single person is in control of reaching KPI targets and if they don’t it must be their fault, has to be called out.

It will take a while to build enough trust and collaborative spirit in a team (from the board room to the shop floor) to have this conversation. Then when you create the opportunity to have it, here’s what to raise:

This conversation will need time. It should be open, non-judgmental, with time for everyone to be heard. You might even benefit by bringing in an impartial facilitator who simply manages the participation.

Executed well, this conversation will deepen the team’s trust and their hope and courage to strike down the fear-causing belief in a single blow.

Steps to start hacking away at the fear immediately.

We shouldn’t ever wait for the planets to line up and ducks to get into a row before we act on important things. Perfect timing and perfect circumstances are like hens’ teeth. So is the perfect amount of team trust and collaboration to have a conversation that strikes down KPI fear in a single blow.

So until you have enough team trust and collaboration to have that conversation, here are several practical steps to hack away at the false belief that a single person has control over a KPI:

But start with what you believe…

Do you believe that individual people can be in full control of a KPI hitting a target, and and that they should be held accountable for this? None of the suggestions above will be useful to you if you do.

If you truly want people to contribute their best, collaborate constructively and improve performance of the organisation, you have to let that belief go, or you’ll never kill the fear of KPIs.

If people fear that KPIs will expose under-performance or bad decision-making, performance can’t improve. We have to kill the fear of KPIs.
[tweet this]

What practices are you using now, to kill the fear of KPis in your organisation?