CASE STUDY: Targets Are About Capability Improvement, Not Chasing Numbers

A typical way to set targets is to calculate a target for the year, and then apportion it to each month in that year. The idea is to keep everyone focused on achieving the target, so increase the likelihood the annual target will be met. But it doesn’t work.

These targets are typical of sales teams, where each month the sales reps will chase a minimum value of sales, to contribute toward hitting the annual goal.

The example below shows how monthly targets are apportioned ‘realistically’ throughout the year. The sum of these values is the annual target (it’s $14,000,000 in case you’re burning to know). Red values are where actual performance was under target for the month. 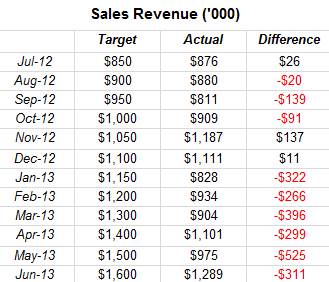 There will almost always be red values, unless the current capability of the revenue-generating process is already well ABOVE the target.

The red values are simply a product of natural variability, the up and down fluctuations from month to month. Every measure will always go up and down to some extent, resulting from the interplay of a huge array of causes – including both external environment and the design of internal business processes.

But while ever sales staff focus on hitting monthly targets, they won’t have the time or awareness to work on the business processes – they’ll most likely just do what they can to hit the current month target.

A better way is to use targets to improve capability, not chase numbers. The following is an XmR chart of revenue, with a target point sitting above the date by which it is to be achieved. It’s the same data as in the table above, but with a bit more of the historical data included, back to January 2011.

The target for the XmR chart was calculated by dividing the annual target into 12, given that the measure is calculated monthly. This target is where you want the Central Line to get to, ideally well before June 2014.

Currently the revenue generating capability is about $1M per month, and the target is $1.17M. Apart from the signal of an upward shift back in January 2012 (who knows what caused that), there is no signal whatsoever that revenue is increasing enough for that Central Line to move up to the target.

The sales reps might be working their little bums off, but the capability of the business processes is holding them down.

Think of a hotted-up street car at the drags: it’s not ever going to consistently produce 12 second runs UNTIL the processes of that car that constrain acceleration and speed increase their capability: engine capacity, fuel mixture, engine timing, tyre traction, etc…. Driving harder won’t achieve it,  not without the risk of blowing up the engine by over-revving it.

Chasing targets by focusing on hitting a number each and every month encourages behaviours that are usually unsustainable: working faster, working longer, trying harder, or going for quick wins that might sabotage other areas of performance (like customer relationships or staff retention). You continually need to inject more effort to keep hitting monthly numbers.

Bigger gains for less effort. Isn’t that what performance measurement and improvement is really about?

Try this out on one of your performance measures: set a capability target, plot your measure in an XmR chart, and enjoy the insights that suddenly appear!