Why KPI Thresholds Are a Really Bad Idea

KPI thresholds are not improvement tools; they make people react in a rush to quick fixes and gaming that end up making performance worse.

Imagine you’re watching a KPI from month to month (or whatever the measure’s cadence is). And suddenly you see the KPI value drop into the red zone. What do you do?

KPI thresholds will encourage you to react, rather than respond.

If your KPI drops into the red zone, you will likely rush to find out why and what needs to be fixed to quickly get it the heck out of there. But is that the right response?

Thresholds are set arbitrarily, often by the KPI owner, or informed by customer needs, or competitor benchmarks, or the strategic direction for the organisation. Rarely are KPI thresholds chosen in respect of the KPI’s current performance capability.

The problem with KPI thresholds is that they encourage us to compare the most current KPI value, like this month’s value, with the thresholds. This month’s value might fall in the red zone, the amber zone or the green zone. And how we feel and what we do depends on where it falls.

And it’s this common human misunderstanding that creates the consequences of overcorrecting and undercorrecting of performance. In the worst case, it makes performance less predictable, less controllable, and less capable of ever getting into, and staying in, the green.

The way KPI thresholds trigger humans to feel and react is at the root of why thresholds are not improvement tools.

Why I don’t use KPI thresholds

In a nutshell, I don’t find them useful in driving the action that will improve performance.

I don’t want to be reactive to every single KPI value. I want to respond to patterns in my KPI’s variation over time. I want to do this, because I’d rather find an underlying limitation or problem and fix it once, to elevate performance to a new sustained level.

I call this type of response to KPIs “fundamental improvement“.

KPI thresholds make us assume that performance is already capable of being green, rather than helping us understand reality.

Remember that thresholds are “shoulds” and not “cans”. When they are painted over a KPI time series, they suggest that the underlying process or system that the KPI measures should be able to hit green any time we choose. Like we should have this month. Or we absolutely must next month.

But the truth is, the current performance of any KPI is probably not good enough to always be in the green. That’s the main reason we measure something: because it needs improvement. Thresholds might work for measures that are already at the level we need them to be, when those thresholds are set to match the natural process limits of the measure, and used to interpret appropriate signals of change. Then we’re monitoring for deterioration, to catch it in time.

When people feel they have to rush to find a fix and get the KPI out of the red as soon as possible, they will do whatever they can. That’s why we have a term in performance management known as gaming. Thresholds encourage people to manipulate the data or game the process to get next month’s KPI back into the green.

We should all be completely sick and tired of hearing about how sales people game the sales process to hit their quarterly quotas. They discount heavily, put pressure on customers, even bribe customers to buy. All the things that will put their sales into the green next quarter. But as customer loyalty and profit margins fall, it guarantees more red in the future.

No improvement lag timeframe is allowed for in KPI graphs with thresholds, even though improvement to shift current performance to a sustainable new level always takes time.

KPI thresholds encourage us to rush to fixes, rather than pacing us with enough time to make a fundamental performance improvement.

KPI thresholds are often combined with targets, which is just downright confusing.

If you add a target to a KPI that has thresholds, what on Earth does that mean? Thresholds are, themselves, a type of target. They are telling us where performance should be. That’s exactly what a target does.

But there is advice out there, from professional firms, saying it’s okay to add targets to KPIs that already have thresholds. Like this: 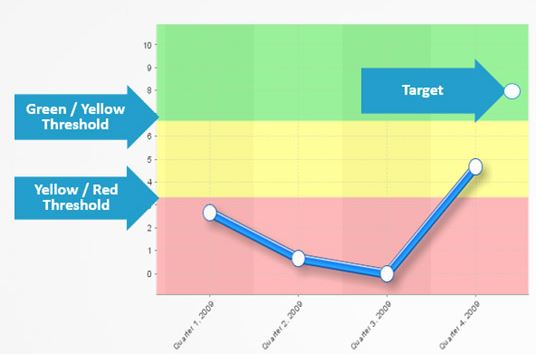 No system of KPI thresholds or targets will work unless it’s designed on a foundation of valid statistical theory.

There is simpler, valid, and more useful alternative to KPI thresholds.

Firstly, we need to be clear that when we measure something, we’re doing it because it’s important to improve it, or hold it at a required level.

Thirdly, we need to appreciate that fundamental improvement, where the underlying process being measured is improved, takes time. Reaching a target of any kind happens in the future from when we set it. Not next month.

So the best way to set up a system of monitoring KPIs for improvement is to do three things:

It’s not that hard to do it right. Don’t listen to the BI software developers who can build colourful graphs. Listen to the experts who understand how to get insights from data.

KPI thresholds are not improvement tools; they make people react in a rush to quick fixes and gaming that end up making performance worse.
[tweet this]

Why not create a second version of your KPI in an XmR chart with a PuMP-style target, then notice the difference in how people feel about the KPI, and how they interpret it and respond to it?